WOW!!!! The food oh the food. Everything is fresh and delicious. I can eat there everyday. For me it's a taste of home. But the best thing is the owner. He is such a nice guy down to earth that truly has a passion for his craft. It's not a chain it a self owned place which I always prefer.

De Babel in the Media 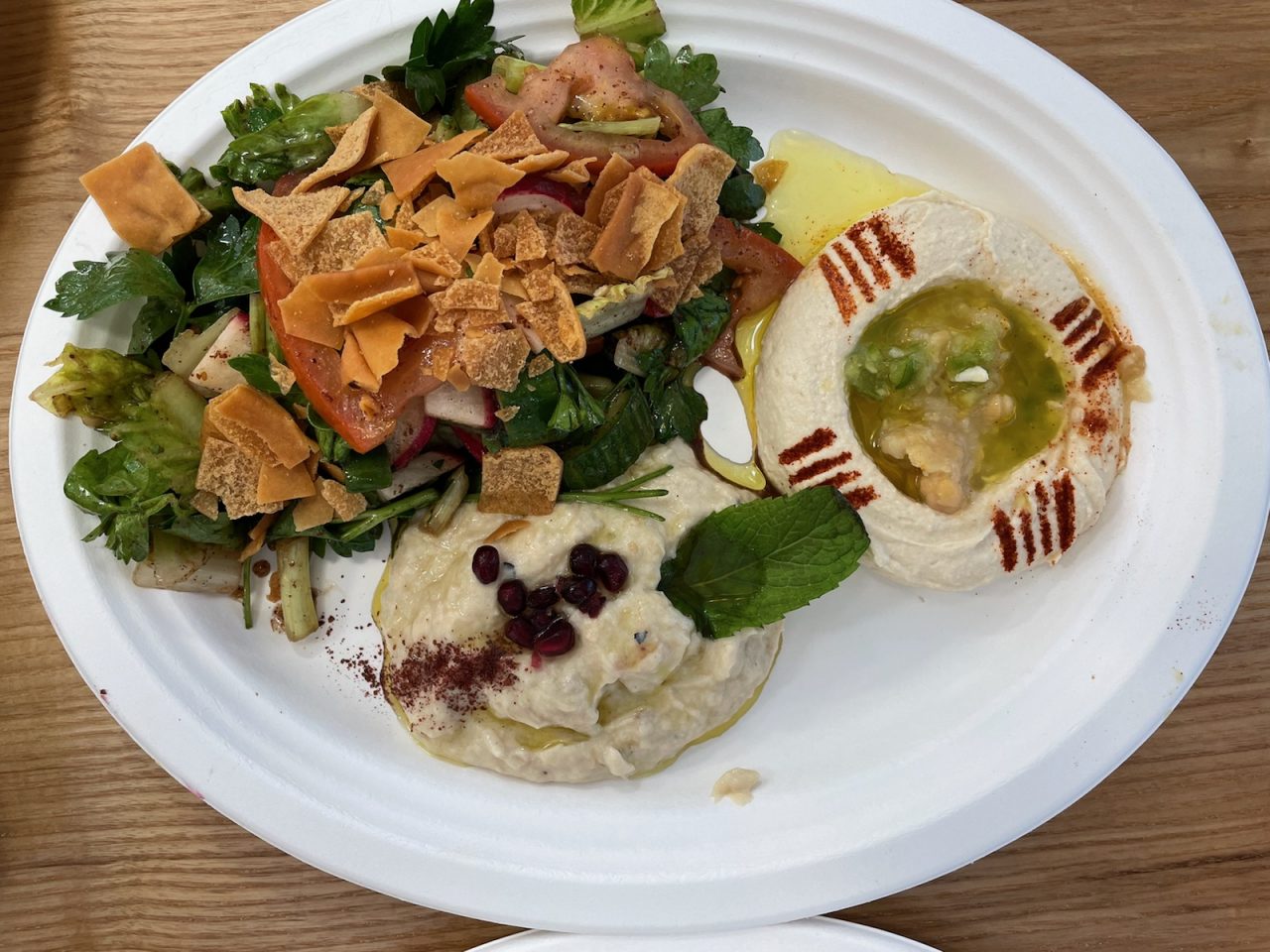 For many of us Westerners, the word “Babel” conjures the Biblical story of the Tower of Babel, erected by Babylonians who aimed to reach for the heavens and incurred God’s wrath for their arrogance. But that’s not where Marwan Kandeel, the owner of De Babel — an upbeat Middle Eastern fast-casual in North Scottsdale — was going with the name at all. “Babel” is also the Hebrew word for Babylon, one of the ancient world’s most splendid cities, part of a once-great kingdom and therefore the seat of culture and fabulous food. Given the allusion, it’s safe to assume that Kandeel, who grew up in Jordan and spent 25 years in Dubai, operating corporate entities such as Cinnabon and Five Guys, aspires to Middle Eastern fast-casual greatness here, and he pretty much achieves it — despite the occasional misfire.

Not surprisingly, Kandeel zeroes in on aesthetics, elevating his strip mall space with black-framed photos of street scenes, artisans, foods, and places of worship across the Middle East. He also imports puffy, elastic pita from a 102-year-old bakery in New York, tucking both sandwiches and crispy, perfect hand-cut fries into paper sleeves that simulate old French newspapers. Expensive take-out bags, which say “thank you” in a dozen languages, are provided for leftovers. Classy stuff for a fast-casual indie. Meanwhile, the culinary side is handled by Chef Suliman Saleem, a 25-year veteran of Middle Eastern cooking. His menu features classics such as falafel, shawarma and lamb kafta as well as oddball dishes and ingredient combos that suggest a modern, anything-goes approach. Would you expect truffle cheese fries, coleslaw or mushroom soup on such a menu? Me either, but who’s objecting? His fusion-y pita sandwiches, some smeared with green chile sauce, sound fun too.

Kandeel creates a made-to-order meat platter to give us a taste of everything, and while the grilled lamb cubes (tikka) and grilled chicken cubes (tawook) are both moist and tender, neither competes with lip-smacking grilled chicken wings, faintly sweet and juicy, or the kafta, so crazy-good I’m floored. Kafta — flattened, cigar-shaped meatballs formed with ground beef and lamb — has never aroused the faintest glimmer of interest in me, but this charred, juicy version, bursting with meaty flavor and almost sticky at the edges, is off the chain. Our platter also contains pink pickled turnips (sour and bitter at once), slivered sour pickles, grilled bell peppers and the perfect meat enhancer, sliced raw white onion with parsley. It’s only after the fact that I realize that a few of the sauces mentioned on the menu — particularly tahini and green chile — would have taken this meal to another level. We were brought dill-flecked tzatziki, bright, lemony aioli and a seriously hot red pepper sauce somewhere along the way and liked them all. The hummus, fashioned into a bowl shape, filled with melting chickpeas and painted with paprika, is as beautiful as it is delicious — fresh, earthy and creamy. Smoky baba ghanoush, redolent with garlic, is just as good. For presentation, it’s dusted with sumac, given a sprinkle of juicy pomegranate arils, drizzled with olive oil, and poked with a mint leaf.

Tabouli, a mix of bulgur, parsley, herbs, lemon and olive oil, is Lebanon’s famously light but hearty salad, while in the Egyptian Fattoush, parsley becomes the “greens” for a salad composed of cucumber, radish, tomato and green onion, anointed with a lemon-sparked and faintly bitter pomegranate dressing. Stale, off-tasting pita chips sprinkled over the top ruin this one for me.

Aside from the kafta and the Babel wings, the outstanding dish of the day is preternaturally fluffy rice pilaf, aromatic with spices and faintly nutty tasting. We’re happy to be given a fragrant heap of it. Then again, piping hot falafel — crunchy on the outside, fluffy, herbal and earthy within — are exceptional too. Love the shawarma sandwich, stuffed with a juicy beef and lamb mix slow cooked with tomatoes and onions. An avocado, hard-boiled egg and green onion sandwich is so fresh-tasting I snarf it halfway down before realizing it has neither the hummus nor the green chile sauce that drew me to it, just a slick of olive oil. Dang!

The only solid negative — a dreary hunk of baklava that lacks the abundance of honey and crisp phyllo (not limp cardboard) that would make it worth eating. Ugh.

I mostly love this place even though I’m annoyed my sandwich was lacking key components. If you’re going to have all kinds of fancy dips and sauces, make sure you serve them in or with dishes exactly as you describe them on the menu. But hey, for the most part, De Babel is de bomb.

Yvonne G.

Scottsdale, AZ
Read More
A recent addition to the Scottsdale scene, De Babel is a restaurant that you won't want to miss. If you like middle eastern food, you will be absolutely delighted. The place is attractive, colorful and really clean (even the restroom). Lots of choices--all amazing. We had the lamb platter which came with salad, delicious basmati rice, pickled turnip sticks. I had a platter of falafel and hummus with pickles and pickled turnips. The pita that came with it was nice and thick and even had craters in it almost like an English muffin. Wow. Was that a delish pita! We ordered a side of tabouleh which was generous and super fresh. They use quinoa instead of bulgar wheat in the tabouleh and we loved it! All of the food--- yes all of it was delicious. Falafel crispy on the outside and moist on the inside-wow. The lamb was flavorful although hubby likes it rarer. He loved the basmati rice, grainy and not greasy. The staff was welcoming and friendly. Thank you guys for the wonderful meal. We enjoyed it so much we will definitely be back. Not even the monsoon will stop us!
Jesse P.

Hastings-on-Hudson, NY
Read More
Admittedly, my first review of this place, now deleted, was unenthusiastic. I made the mistake of ordering delivery rather than dining in. But the owner was quick to respond, and treated me to a second chance. Now that I've been fortunate enough to sit in De Babel and have the food served fresh, I assure you the difference is night and day. This is VERY precise, delicious cuisine that is masquerading as casual food (with casual prices). Lucky us! There is really something complex and beautiful going on with these flavors. I spoked with the chef, who has a spectacular beard and dominant grip, and the man knows his food. I can tell he thinks about this food all the time, even when he's not cooking it. The level of preparation, given the pricing, is something to marvel at. Example: He told me the hummus is a two day affair. The result is that incredibly smooth texture that store-bought hummus can't touch. But the hummus is second to the babba ghannoj. It perfectly hits that sweet spot where texture informs flavor. This is the best version of this dish I've ever had. Everything else was phenomenal - everything is worth a try. But perhaps most worth mentioning was the plate of meats brought to us which included Lamb Tikka, Kafta, and Chicken Tawook. Each cube of meat was deliberately prepared, and seared perfectly. The Kafta was crisped on the outside and still pink inside, just perfect, with a surprising flavor that I promise is unlike Kafta you've had before. The chicken was moist and stayed moist throughout the entire meal; amazing! Final points: Family friendly, casual, IMPECCABLY clean floors and bathrooms, well-staffed, easy parking, vegetarian friendly. There are ZERO reasons you should not try this place. My first 5-star review in Scottsdale! I thought maybe the owner was being overconfident about my second try but the man knows what is he about, knows what this restaurant is about, will most definitely succeed at this location.

Danielle R

Phoenix, AZ
Read More
We came here after being out running errands. It seems this restaurant is super new. The owner was very friendly and provided a couple of samples to help us decide on our side dishes. We went with the lamb tikka with rice and baba ghannoj and chicken plate with hummus and fries. Both plates came with a side salad of sorts which included tomatoes and peppers, olives, onion, lettuce, etc. Everything tasted great including the side sauces. The only item of slight critique is a bit more meat to carb ratio would be better for the platters. We will definitely be back when if/when we are in the area again.

Evelyn D.

Queen Creek, AZ
Read More
Stopped in here after the quilt show in WestWorld. Very clean and the staff were very nice. Our order was: Chicken shawarma sandwich with fries - very tasty, large serving Fattoush salad and a side of grape leaves - the salad was delightful a nice dressing that was bright and refreshing. We also received some complimentary falafels which were delicious. - the grape leaves were nice and thin. Quite tasty. The ice tea was terrific, it had a hint of a middle eastern spice to it that was very refreshing.